A Response to [T]he Barefootbum

So I've become a bit excited over reading Larry at The Barefootbum, and what a way to get back into this whole blogging thing again then to tray and do something I've never really done here before... You know, politics... No doubt I'm getting myself into a world of shit, but what the hell, I like to learn....

See Larry's post HERE. His words in blue below, my comments in black.

I’m not so sure this distinction works all the way through. You’re explicitly making a mind-matter distinction as it relates to social constructs. So when you say:

“Ownership, as distinct from possession, is a social construct. Ownership might reference possession, but ownership and possession are different concepts. Possession is a physical fact; ownership is a shared idea…”

You’re essentially saying because possession has some phenomenal characteristic that it’s objective and therefore not a construct, but the “essence” of possession (or so it seems). But there too this defines possession rather narrowly as merely the appearance of (let’s say) person “X” having something in their hand. How, though, is that any less of a social construct? In a way this tugs a bit at the “found vs. made” distinction where one would like to say, “we created the idea of a banking system, but the idea of a rock in hand is a phenomenon that was always there whether or not there was anyone there to make that distinction.” But the world (even though it may cause us to think, believe and say certain things) doesn’t supply us the reasons for thinking, believing, and saying certain things, we do. As such I’m really not sure that we can make any sense of the distinction and would argue that possession is every bit a social construct as ownership is. From there the difference between ownership and possession is a bit trivial in that possession is just the adjective we apply to persons who have things but don’t own things; it’s merely the application of either-or social convention. So the question here would be, how is “possession” any less a shared fact than “ownership” once we get rid of the distinction that there are subjective facts vs. objective facts? Why should we want to make that distinction?

Well, I’d argue that no, it’s only because you’re creating a distinction between “external facts” and “social conventions” that’s leading you to such a conclusion. If both are merely separate social conventions for two separate ideas, then conflating the two wouldn’t make sense for other reason outside of the external/internal distinction.

Next you state:
“Libertarianism (with absentee ownership) defines a specific social construction of ownership, one that does not correspond to possession.”

This seems rather trivial though. Why state “specific”? Why should ownership entail possession?

Continued:
“As best I can figure out, Libertarianism establishes ownership as only the unbroken chain of voluntary transfer of property from the original creator to the current owner, and the near-absolute power of the owners of property to use, not use, or destroy that property as they please.”

My open question to myself is, “what’s wrong with that?” Suppose that (and I imagine this is going to be the case in most cases) we’re talking about rental property. Why would a person get themselves involved in a social contract with an individual who has absentee ownership when your temporary “possession” of that property isn’t assured by anything?

Moving on you state:
“It's more difficult to decide between social constructions than external referents. Both are, in a sense, socially created (e.g. we have simply agreed that the word "mass" refers to an object's tendency to resist acceleration), but a social construction does not refer to anything in the external world, and we cannot distinguish between conflicting social constructions directly on a scientific basis.”

I’m not sure I really follow you here. Perhaps it’s the other way around in that you’re giving more to the word possession than it should really have? But even before that I don’t see how it’s more difficult to decide between “social constructs” and “external referents” because the difference between the two relates to a distinction I don’t think we can make any sense out of. You refer to scientific evidence as though we can “scientifically prove” that Bob posses “X” by virtue (for example) of just testing it out with our eyes as though testing for ownership by looking at a Title or Deed would be any different. The difference has to do with how we define the social construct, not that one is “objective” and one is “subjective”.

This would make sense only if we can make sense of the distinction between internal and external, and I don’t think we can.

So when you continue:
“It cannot be that the Libertarian construction is scientifically determinable, because "ownership comes from the unbroken voluntary transfer from the original creator" does not directly reference anything in the external world”

I would suggest that it doesn’t make any sense to say that it’s scientifically determinable, or that it even should be. That’s a distinction that you’re creating, although perhaps at the same time that’s what Libertarians would like to argue. I certainly wouldn’t. 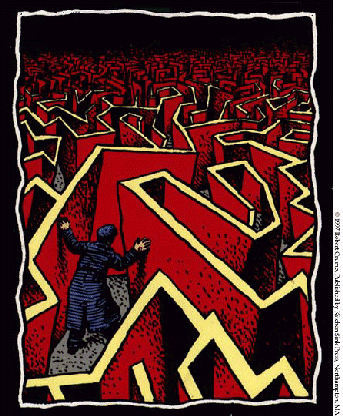